A return visit to Disneyland is meaningful on a couple of levels. I've been made the pilgrimage dozens of times since first going as a child and returning causes a wealth of emotions to reemerge. This past was a chance to marvel at a company that has mastered brand marketing.

The consistency of the interactions, the attention to every detail and the ability to deliver happiness as a commodity are truly enviable. 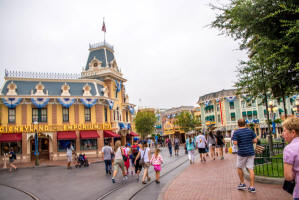 While some publications rate colleges or restaurants, I've maintained a personal top ten list of Disney Rides. The criteria for the perfect ride is as follows:

The only recent change to this criteria over the years is that now a ride can't make me feel sick either! For over 20 years the top slot has been solidly held by Indiana Jones. I often ask people what they think the best ride is and if they didn't say Indian Jones, I would question their mental faculties. But all that has changed. Here's my new top 10.

The formula for Disney's success is not just the best rides in the world, but the entertainment, the characters and the food are all an important part of the experience.

Here's a list of thoughts from this reporter's notebook:

When we discussed going to Disneyland I voted “no.” Not only did I lose the vote but I wasn’t even told about the trip until 48 hours before we departed. I don’t do spontaneous well or even “at all.” So it took enormous restraint for me to appear to be in a Disney mood throughout the journey. While this was very hard for me the one upside is that Eve and Kevin colluded to prevent me from seeing the price of anything related to the trip. It’s amazing how much more fun a trip like this can be when one is oblivious to the cost.

Certainly Disneyland is the happiest place on earth.

See all the Disneyland Photos